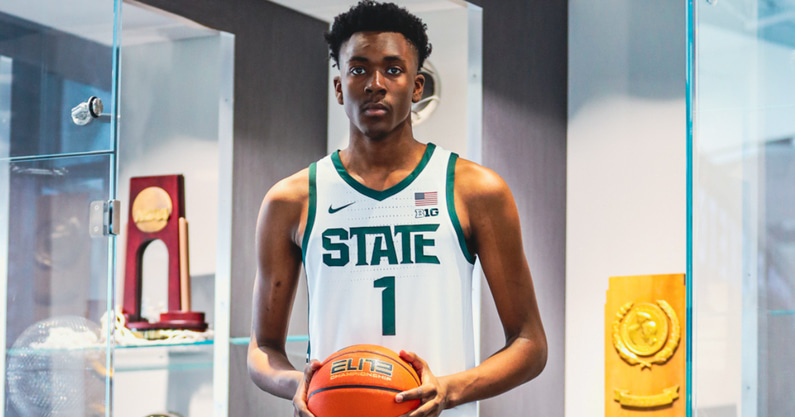 I knew Booker had been skyrocketing this summer, but what immediately stood out was just how well a player this young at his size could handle the basketball.

I was more familiar with some of the other top prospects and having watched their videos first and what became apparent immediately was Booker was the guy with star potential. There is little question in my mind now he has star potential with his 7-5 wingspan and skills. He even stepped back and hit a few threes.

The stats I was able to find indicate he didn’t play much as a junior which would explain being off the radar some coming into the AAU games this summer, but he was highly productive averaging 12.5ppg, 6.7rpg, 2.3bpg in only 18.9 minutes. I have no clue why he wasn’t playing nor do I care if he was that awesome when he did play. What is so hopeful is he made 36-101 threes at 36% and shot 74% from the foul line both on good volume considering the low minutes he was playing.

He was also 61% on 2-point FGs and even had a low foul rate. The only thing that stood out a little in the stats as a negative was 2.0 turnovers vs 1.4 assists. Two turnovers for a big in only 19 minutes a game is high, but I take that as he was trying to generate some offense which probably isn’t the worst thing at his age and size either. Even as a low-minute guy he was trying to do a lot when he was on the court.

He projects as a player that can impact the floor on both ends. The way he is on fire rising now I think is another indication you will want to get on the train and hope the improvement doesn’t slow down any time soon. You like to see this kind of trajectory and leaps. He was probably always one of the best guys, It just seems he was being hidden away on his HS team playing 19 minutes a game. There is still a lot of room to grow his game and physically. Even the fact he is a lefty should be a small advantage that helps him.

I’ve heard the Anthony Davis comparisons and that’s probably a good comp for how his game projects, but the build is more Kevin Durant-like to my eye. That’s who he physically reminded me of more with some of the ball handling and more narrow shoulders than Davis, granted he’s already a lot bigger and stronger than Durant was at that age. The shooting is already pretty solid for his age and size. If the shooting levels up watch out.