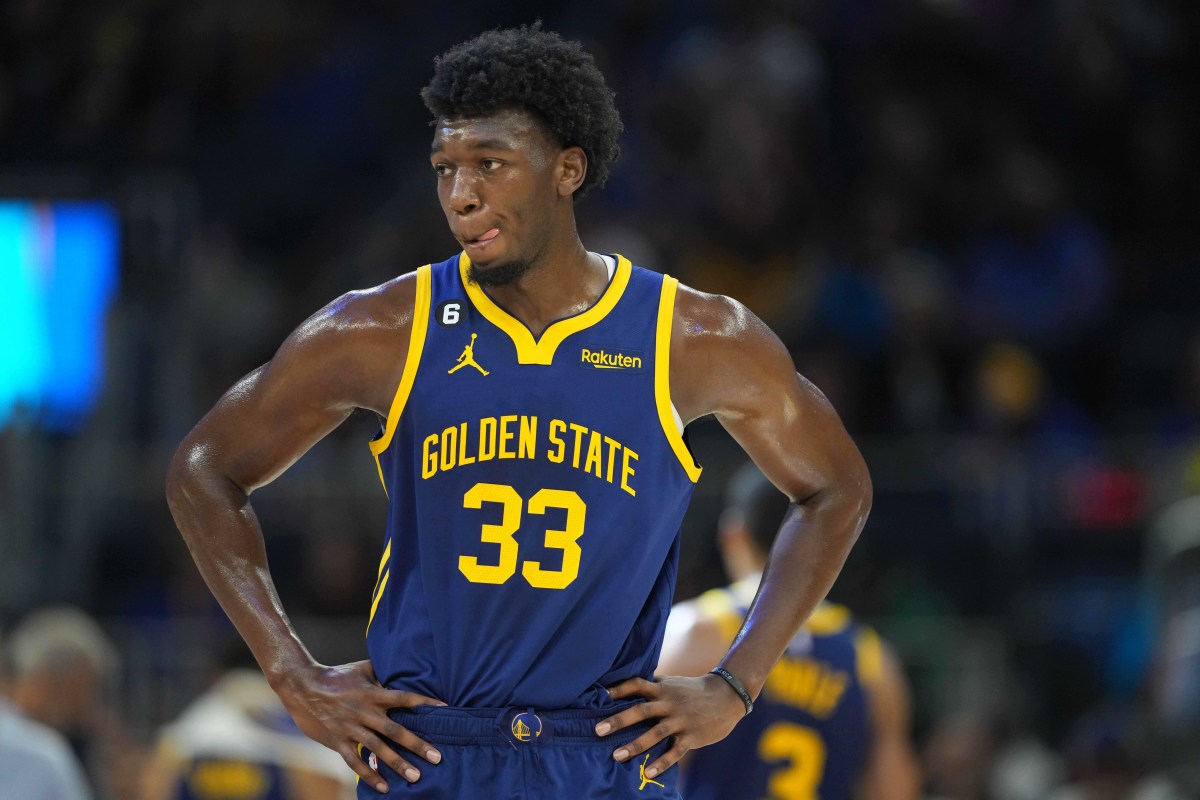 It’s time to go all in Golden State. That might be an odd statement to say on the surface for a team with the most astronomical payroll in NBA history. The problem is they have one foot in the present and at least a few toes in the future. In theory that’s a great plan if you can execute it well, and have this young generation coming behind the championship core. I thought that this young core would start to contribute this season. I saw Kuminga as the most likely to take a step, as he was very solid last year. I just didn’t expect it to be a step this far backward. Wiseman, I had less faith in, and while he’s doing some decent things on offense, his defense makes him almost unplayable rankings 2nd to last in DRPM among centers. The most important position for a defense. Moody has regressed some himself as well.

As we sit here today with 23% of the season in the books, the team I picked to win the championship has some issues. While I believe if Golden State stands pat that they will still eventually round into form it will likely come at a cost. They need some help to get through this regular season with both a better seed and legs still under them for a potential long playoff run. They picked up a win last night to lift the projections a little. The Warriors currently sit 9-10 with a 45-37 projected tiebreaker from the play-in.

What makes that troubling is Steph Curry is playing out of his mind as well as he’s ever played and this is still a team that might need to play their way into the playoffs. Realistically this is probably the last year Draymond and Klay are going to have the juice to really make a difference. Maybe they can squeeze out one more year after this one, but their shelf life is coming to an end. Right now they are still valuable (expensive) parts of what has made this dynasty. So much has been invested in winning championships with this core that half-measures don’t make sense even if it’s only 15 to 20% focused on the future.

If I really thought there were players too valuable to pass up maybe this would be different. Even before the season, Kuminga was the only one that I really thought had star upside and after this sharp downturn, I think his ceiling has dropped to a level as well that moving on is the right call. It’s selling low on all 3 of the young players, but it’s better than getting caught a year or two from now with players that are role players or borderline starters which is more what it appears Golden State has. Even if they are eventually solid starters on a winning team, or one makes it to a 3rd option sniff of a low-end All-Star, I still think it’s worth going for it. The time is now for Golden State, and they will soon have to be paid anyway.

So Who To Trade Them For

There are names that have been reportedly available or that logically would make sense in a trade. Obviously, Golden State should do their due diligence around the league, but most likely this would be the list, in the trade market.

Of this list, there are only certain players that make sense for the other teams and could fit inside the salary constraints Golden State has. Jae Crowder for example is clearly on the market and would make a lot of sense, but realistically Phoenix would never trade him to a western rival like Golden State or for their young players. If that one was to get done a third team would certainly have to be involved.

What I would personally be looking for is Harrison Barnes, or at least a Harrison Barnes-type player. I’d call the Kings on Barnes, but I doubt they would do that. Jae Crowder would be the type of player that could play a little SF or close games at PF like Barnes could in the “death lineups”. That assumes Draymond can still make the Death lineup work. It’s still the best card Golden State has to play and the best path to their highest upside is to try to go small at Center with Draymond. If it doesn’t work, they could still pivot and play with Draymond and Looney up front. We’ll assume Barnes and Crowder are off the table though.

While I think Myles Turner, Jakob Poeltl, and some of the other centers are more talented in a vacuum and have better players or values on their contracts, I don’t think they fit with how Golden State should go for it in the playoffs. They would help in the regular season, but it basically comes down to Draymond is more of a weapon at Center, and more of a liability at PF in my opinion. You still also have Looney to play some center minutes. Bringing in a Myles Turner could work the way he shoots (to make up some for Draymond) and defends the rim, but probably isn’t the best use of Draymond’s potential or a Warrior’s knock out punch. Turner would also cost a lot to get, and likely to retain next year when he’s a free agent. The Warriors have also deemed Draymond is untradable after not moving him after the sucker punch I believe. We are working within those confines.

This is probably the player Golden State should have targeted proactively in the off-season. The Pistons stole him at a dirt cheap price then, but now that price is likely to get much more stiff the season he is having. I would expect him to hit the trade market again by at least the deadline. There is probably going to be multiple teams after him now and a bidding war to acquire him.

Oubre has some history with the Warriors already, although not a very positive one. That familiarity deserves some consideration though. He has a history of playing some PF, but he’s probably a little light for the job to finish lineups with Wiggins and Draymond. It’s a shame because he’d probably be tradeable straight up for Wiseman with his contract and availability.

Osman is cheap, and could probably stand up decent in a death lineup, but he’s not moving the needle much. The Cavs are also unlikely to want any of the Warriors poo platter of young players even at this level considering they are going for it as well.

He’s someone to think about as a redemption project. He’s not making threes anymore, and he’s really expensive. Miami would most likely love to get off his contract and may even give some assets back. He can play a little at PF and is just a name to think about that is really would be gettable easily.

As you can see there aren’t great options, but I believe this one makes the most sense for a playoff run. I also believe it makes sense for both parties and is doable.

I think they should target everything they can on Bogdanovic. All three young players should probably be enough for Detroit, but he could be a hot target around the league. I don’t see how he does any good on Detroit when they are likely to miss the playoffs currently at 5-15 they likely will and will want to tank probably starting sooner than later. Make it now and get more value. The young players themselves should make sense on the Pistons for upside.

Bogdanovic current averages is 20.7ppg, 4.0rpg, 2.5apg, 18.1 PER. He’s really light on the rebounding but he can and does play at PF 77% of his minutes this year. I think you just have to hope he and Draymond pick up the boards if they are closing games in the post. He’s scoring at an elite clip and .645% true shooting on that 21ppg. He’s doing it with a lot of pressure on him being on a bad team too. He wouldn’t get the same kind of usage but he would be another major threat in a Warriors system. I think this is the best move they can make. The Warriors could probably ask for Rodney McGruder as well when he’s eligible to trade and add him to the deal, but he’s ancillary. It’s better to make the trade sooner and hopefully improve the seed.

I’d probably make a minor move for a center that could defend the rim a little and rebound with the empty roster spot. Dwight Howard or Hassan Whiteside are unsigned and wouldn’t be the worst options. I think you can find those types of guys for cheap or easy for a team like this that going to playoffs. There are lots of that kind of end-of-the-bench vets available. Lamarcus Aldridge, Cousins, Enes Freedom, Tristen Thompson Cody Zeller, former Warrior Cauley-Stein etc. You could also bring Bejelica back from last year or another vet in that 3rd roster spot. I think making roster spots for 2 other vets with Bogdanovic also makes the team better as little as the 3 young guys are giving them. They could help get the core vets through the season fresher too, and I would have more confidence in a vet in the playoffs. They could also be a player in the buyout market. It’s a deal I would do at this point.

If it went well, Bogdanovic could probably sign a 1 year contract at similar money and line the timeline up with Draymond and Klay. When Draymond and Klay’s contracts both end in 2024 the only Warriors under contract will be Curry, Wiggins, Poole, and Looney. They could resign both at more friendly deals, or let them walk and have about 14 million and then their exceptions to try to rebuild the team after the 2024 playoffs. I like that scenario rather than signing Wiseman next year to anything. Something needs to be done because the choice on him is coming quickly regardless if he is getting paid or in the plans. They will need to extend him or match him or let him walk anyway by then.