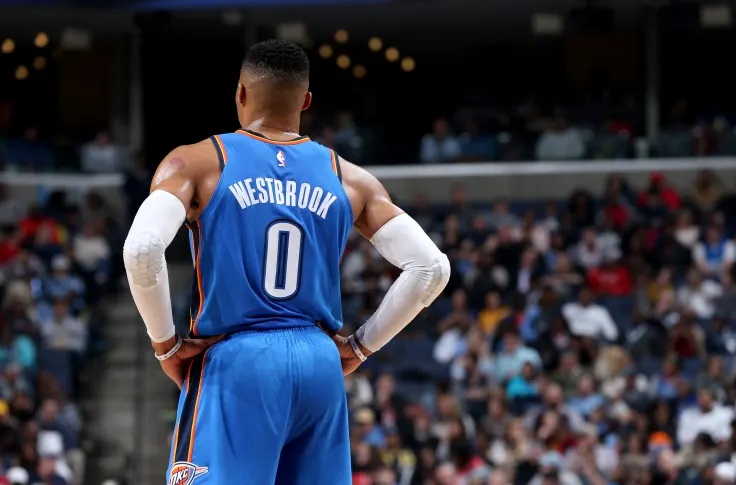 Westbrook is the biggest punching bag in the NBA right now. Certainly, some of his unwillingness to adjust his game to match his declining abilities is justified. You can’t defend the lack of screens he sets or his defensive effort at this point. That said, he never got the credit or respect for the shear force he was IMO at the height of his powers.

Westbrook is one of only 13 players in the 30 PER club ever. What makes him more unique than any of the others averaging a 31.6ppg 10.4apg 10.7rpg in ONLY 34.6 minutes per game, was his season was fairly inefficient at .554 true shooting. The league average that season was .552. That means he was putting up an almost unheard of counting stats per possession to offset the lack of efficient percentages. Whereas most other modern players on this list had True Shootings well in the .600+ range. The only player ahead of him that didn’t was Chamberlain, who of course played in an era where no one was scoring efficiently like today. The league’s true shooting average was around .480 those years. PER is all adjusted to league average and pace though, so it’s respective of when you play.

The only other man to average a tipple double in NBA history is Oscar Robertson and he did that once while Westbrook has done it 4 times. For Robertson, it was a time when the league’s Pace was 126.2 vs the 96.4 per 48 minutes it was in 2016-17. There were also a lot more misses and as a result of the pace and poor FG percentage, rebounds available were massive. The league average in rebounds was 71.4 vs 43.5 in Russ’s MVP year. Robertson also needed to play 44.3 minutes a game to put up this stat line even while he was getting a massive amount of possessions. The per possession impact of these seasons really isn’t comparable even if they are the only 2 in the club.

Russ has the 4th highest per 100 possession scoring season ever. That even includes prior seasons because we can estimate Chamberlin’s 50ppg season would have been 41.5 per 100 possessions. The True Shooting was pretty similar to Jordan’s as well that year at .562 vs .554% from Westbrook. Also very similar to Kobe’s at .559. The League True shooting overall was 1.4% better on average than 1987 when Russ played. In the ball park.

What really puts it into context for me is when you look at just the Westbrook MVP season vs the all time career highs of some other perimeter greats. This is apples to apples from a per possession perspective. One could argue Westbrook could go harder in 35 minutes a game than Jordan, Kobe, or Lebron playing 40 minutes. (Harden was at 38mpg) There is some truth in that, but the other numbers outside of scoring aren’t close regardless. They still wouldn’t be if he played 3 to 5 more minutes and would have seen a fraction of a haircut to his per100’s. It may sound like a hot take but it’s not, no one has had a season making the impact in the counting stats that everyone looks at first. It’s not even really close.

OKC was 30th in 3 Point Percentage

Dead last percentage, and not much better in 3 point rate at 18th. What makes this all the more incredible to me is the fact Westbrook played on one of the worst three point shooting and spacing teams in the NBA. He was actually a positive 3 point shooter at .343% for this team that would average .327%. The surrounding cast was even worse than it would appear, and you can’t blame 32% on him when he’s most of the positive value at the volume he made them. 32.0% without his shooing.

Russ did not have many open lanes to attack the basket. He had to make baskets as teams crowded the paint and didn’t respect OKC’s lack of shooting and shooters. He also had no other star to take any of the gameplan of opponents either and pressure off him. Russ was the entire focus of the defense every night. No one around him could even make open 3 point shots at a respectable level. While the misses could help the long rebounds a little, he didn’t get easy catch-and-shoot assist that season or any space. What could he have done on offense had he played with a Klay Thompson where he just had to hit him coming off a screen or had teamshooting like Lebron or Harden had that season.

JR Smith and Kyle Korver weren’t Kyrie or Love as Lebron also had that year, but could have certainly given Westbrook more space to operate and get to the basket and score or an easy assist kicking out or hitting off of a screen once in a while. Westbrook had Andre Roberson in the backcourt instead. That’s what blows my mind the most. While Roberson was needed on defense beside Westbrook since he was atrocious as a defender, he did nothing to help these offensive numbers. Westbrook was still #1 in Box Plus Minus overall in the NBA as well and a +8 NET rating per 100 possessions. It wasn’t like his impact towards winning wasn’t felt still. It was pretty amazing he got that group to 48 wins.

Just having a decent defender like JR Smith at that point, that could be a three point threat would have helped I think a lot more instead of a complete non shooter like Roberson. It makes the gaudy Points and Assist per 100 possessions all the more incredible in that context. He wasn’t given the keys to Houston ecosystem Harden had, for sure. It was about as bad of an offense build for him to be successful as you could imagine, yet he still put up an insane PPG/APG. I would have expected even bigger numbers had he been in the system D’Antoni put Harden in with their shooting.

Russ is such an ornery guy that it does make him unlikable, especially within the media. When he was great, though, he never really got the respect for how great he actually was IMO from the media or fans. His MVP season really deserves to be talked about as one of the All Time Great seasons and more often than it was. I think many kind of write it off as one of the weaker ones considering the lack of team success.

I think if anyone had said 10 or 20 years prior that we will have a player averaging 32ppg, 11rpg, 10apg that would have been considered superhuman. If Lebron or Jordan did that on a 48 win team in the stronger West, I think it is talked about in the annals of the NBA records books as one of the most amazing individual seasons ever. In 35 minutes a game no less, it’s a truly insane season. When people that were to young to appreciate it now look back in 20 years they will probably view it much better as well.

Jordan for example averaged 37ppg on a 40-42 team that was swept in the playoffs, and yet everyone that knows basketball history still knows that as the highest non Wilt scoring season ever. Similarly, on the team Kobe averaged 35ppg they won 45 games. I think these individual feats are kind of like hitting 70 home runs in baseball and should be easy to recall. Russ basically scored at a similar rate as Jordan and Kobe in their best scoring seasons ever on similar True Shooting and added PF level rebounding rate and league a leader caliber assist even with crappy players around him. Won more games as well. It should be viewed on a different level and watching it to see if he could get a triple double each night was almost like following McGwire or Sosa chasing 60 homeruns for me.

Westbrook is probably right to have a chip on his shoulder as he’s been one of the most criticized elite players ever I can ever remember. Even when he was 23 years old and averaging 27ppg 7rpg 7apg in the finals vs an all time great Heat team Skip Bayless would criticize him for being aggressive and shooting in the 4th quarters. This while deriding Lebron for essentially being afraid to. How about we appreciate the fact he was even there at 23 years old and fearless.

Hopefully Westbrook can acknowledge where his game is today and adapt or bow out gracefully. I hope we as fans can appreciate just how good he really was more often.

Alternative History: What if Jordan Was Drafted by Portland or Traded to Houston in 1984
2022-2023 NBA Player Rank
%d bloggers like this: