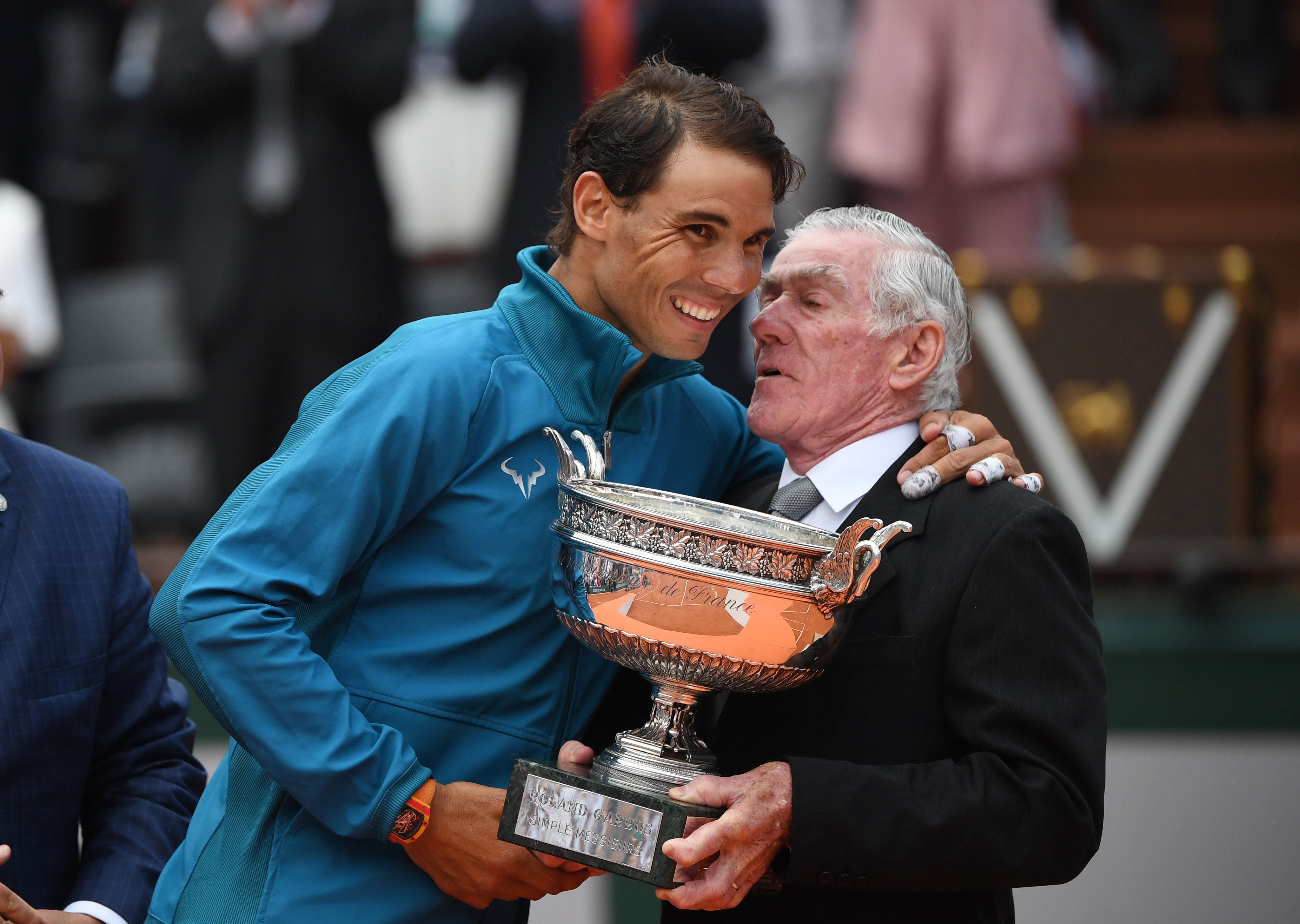 In sports, thee is no way to really compare the eras or to know how a player from the past like a Ken Rosewall or Rod Laver could compete in their prime vs Pete Sampras or Andre Agassi.  There is however what I call connective tissue, players whose careers overlapped. I think we can draw some conclusions for how they may have faired and I will take you from Ken Rosewall all the way to Carlos Alcaraz in just a matter of 4 players. 4 players who’s careers overlapped and were in the top 10 at the same time and who all competed and played head to head.

I first did this concept for The Hoops Resource where I compared the different eras of the NBA. Here is a link to that article if you are interested.

Sure we couldn’t know how Wilt Chamberlin would fair in the 1990s vs Shaq, but there were players that competed against each other like Wilt and Kareem who would later still be top players in other eras at the end of their careers and compete against the next generation like Hakeem Olajuwon who would. I think you could then draw a throughline with the era and gain some knowledge about how the older legends could compete against younger ones on their way up.

Tennis has a much richer history than basketball, but it’s also complicated by just how much the equipment has changed over the decades. Particularly in the 70s and 80s when revolutionary advances were made in racket technology as the sport gained popularity. It also allowed for a shift to more of a baseline game. Much like in golf though there were players in the transition that were still all time greats on the other side of the equipment transition and adapted and continued to play at a high level even as the game drastically changed.

I remember golf going through big changes in the 90s from actual persimmon woods to more modern drivers. The year after Tiger Woods destroyed the Masters field by 12 strokes to win his first Major and was dominating the sport Jack Nicklaus finished 6th in the Masters in 1998 at 58 years old with the new equipment. He was 2 shots better than Tiger Woods in that tournament.  That’s not unusual though in a sport like golf to be able to put it together for one tournament. It’s also not unusual to blow up and finish dead last and miss the cut no matter who you are. That’s the nature of that sport with that much variance. Tennis at least is much more predictable, certainly over the course of an entire year.

In our exercise, we will focus some on the individual head-to-head matchups but mostly on yearly success.

Let’s start at the inception of modern tennis in the Open Era. If you are not familiar with this reorganization it was when professionals were allowed to play in majors with the Amatures starting in 1968. Before the Open Era only amateurs could compete for the grand slams as we know them today.

Rosewall is the best fulcrum to the two eras his career spans the Open Era and the Amateur Era before it. He won majors like the US Open, French and Australian Opens in the mid 50’s in the Amateur Era and was still a finalist in the mid 1970’s.  Amazingly he played until he was 43 years old.

Rosewall was the #2 player in the world from the inception of the Open Era behind Rod Laver in 1968 until 1971 at ages 34 to 37 years old. By 1972 he had fallen to #6 in the world by age 38, but what is noteworthy for our purposes is this is the year Jimmy Connors would become one of the best players in the world and finish 15th at 20 years old. Their careers were about to intersect and the first handoff of the torch so to speak.

Here are the end-of-the-year rankings for the rest of their careers overlapped.  As you can see Rosewall was still one of the best players in the world.

Rosewall would win his last two majors in 1971 and 72 at the Australian Open, but he would make the finals in both the US Open and Wimbledon in 1974 where he would get annihilated by Connors in both.  The two would play 8 times in total with Connors winning 7 of them.  The only time Rosewall would beat Connors was in the first meeting in 1972 when he was 38 and Connors was 20. Still, I believe this shows he could compete with Connors well past his prime and both were still top players in the sport even as Rosewall was nearing 40 he was he made two slam finals. There was no shame in getting beaten badly by an all time great in his prime at that point.

Connors would go on to have one of the longest careers in tennis as well and play. We all remember his US Open run in 1991 but his last ATP match was in 1996 at the age of 43.  He successfully navigated a time period that saw the racket technology and game change greatly which makes his staying power even more impressive. The Cinderella run at the US Open was impressive but his last great seasons were in 1988 and 1989 when he finished those years 7th and 14th.  By this time Andre Agassi who would help define the next 15+ years was on the scene. Agassi would finish 3rd in the world in 1988 at the age of 18 while Connors was still highly ranked at 7th at the age of 36.

They would only play head to head twice both in the US Open, both in the Quarter Finals. Connors would lose both, but the one in 1989 was an epic 5 setter.

There was no question a player from the early days of the Open Era could still compete at a high level even with more modern equipment changes and all with another all-time great who was in the top 10.  It was another inflection point in tennis.

Sampras was, of course, the best player from the preceding era and Connors would play him twice as well, but Agassi would have more longevity and still be relevant by the time the Big 3 arrived taking us all the way to the present day.

Agassi would play Federer 11 times winning 3 of them. The last meeting in 2005 in the US Open Finals in a 4 set loss.

Agassi would play Nadal twice losing both in 2005 and 2006 including this one at Wimbledon where he took him to a tiebreaker in the first set.

They were still some of the best players in the world crossing paths.

I have a feeling we will have a chance to see to look back on this in the future as another moment in tennis history and bring us well into the future.

So what does this all mean? Could Ken Rosewall compete vs Nadal? I think there has to be some transitive property here. I’m not as sure with the rackets changing so much he could compete. I think there is certainly evidence Jimmy Connors could compete with the Big 3 in his prime, and still have been a top 10 player today. He was one of the first players to stand on the baseline and bomb away even before modern rackets came about to better allow for this.  He had the style of game that would and clearly did translate through the changing times and eventually most adopted this style. That doesn’t mean a more traditional style of volleying couldn’t have worked. John McEnroe was still effective through the transition as well.

That’s kind of where I draw the line, and Rosewall with his style would have likely had a tougher time adjusting to the modern players, styles, and rackets. That said Rosewall did beat Connors once, and he still was a top 5-10 player in an era where Connors was #1.  It wasn’t like he was some old washed up man making a fluke run like Connors in 1991. In his prime maybe Rosewall very well could have, I just don’t see the evidence as definitive with Connors style.

If Rosewall could have put up a better fight than he did in the finals of the US Open and Wimbledon in 1974 against Connors I would have leaned more that way but he didn’t. I think we saw enough from Connors with a modern racket in his hand to assume he was legit though and beating Rosewall is a big accomplishment on the resume, even in 1974 he was still a world class player even at age 39. To beat him like he did is special.

In the span of only 4 players careers, we went from Ken Rosewell winning 2 majors 1953 to Rafael Nadal winning 2 in 2022 with only 2 players in between. I think that is pretty cool and Alcaraz might take us to 90 years with only 5 if we are fortunate.

Adjusted Slams: How Many Could the Big 3 Have Had
When Do Tennis Players Peak
%d bloggers like this: