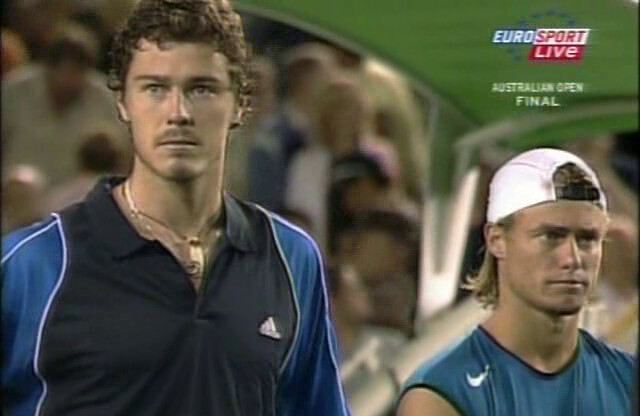 Federer was born in 1981 and his era of peer tennis players is often derided as subpar. If you look at his  players born between 1980-1983 I believe it was a hell of a crop historically with many winning slams, getting to #1, and going to major finals. Most of Federer’s peers were actually shining brighter than him before he ever even really got it going. Hewitt had won his first tournament in 1997 at the age of 16 and Safin had won his first Grand Slam by 2000. Both were the two youngest world #1’s at 20 years old prior to Carlos Alcaraz. Federer by contrast was a somewhat late bloomer in tennis relative to many other all time greats. It was only after his ascent and then the emergence of Nadal at 19 years old to be the chief rival of Federer did you really stop hearing about many of these players. Federer had really eclipsed the rest of his generational peers by that point, and Nadal finished their chances at slams off. That doesn’t mean they weren’t a quality group of players Federer arrived with. There is also really no shame in giving way to players like Federer or Nadal, especially when you made your mark earlier.

The Fed Generation: Players born between 1980-83

When you really consider some of those finals or rankings came after Federer broke through and won, and while Agassi was still around. Some even happened after  Nadal reached #2 by 2005 or Djokovic shortly after it’s very impressive. Federer, Hewitt, Safin, Roddick and Ferrero were all former #1 players and won Slams. All but Roddick won slams before Federer even won his first. Hewitt was the youngest #1 player in the world until Alcaraz this week, but even Alcaraz needed the weird vaccine and Russian bans to disqualify others. I’ve often disagreed with people that 2003-2006 was a weak era. Hewitt is still Top 10 all-time in weeks at #1.While it’s not the big 3 eras, nothing is, it’s 2003-2006 is pretty representative of most of history and these players were all still a big part of it.

In 2003-2006 an all time great like Agassi was still around winning slams and going to finals and ranked around the top 5. Major Champions like Hewitt, Roddick, Ferrio and Saffin were still there to go through.  They looked like great generations on the rise, but were completely eclipsed by Federer’s greatness as much as anything. Nadal was  up to #2 in the world by 2005 and a major winner as well.

That’s even before we get to other age peers to Federer like  Davydenko, Nalbandian, Corria, etc that had great careers.  They were doing things like going to Grand Slam Finals or Semi finals as well It’s really underrated how many good players there were born in the early 80s were that pretty much had all the air sucked out of their careers by Federer mostly even after some of them were on the board first beating him and winning earlier. Fed was kind of a late bloomer in reality at least in comparison to a lot of those his age or Djokovic, Nadal, Sampras etc not winning his first slam until a month before his 22nd birthday and barely in the Top 10 at 21 years old.