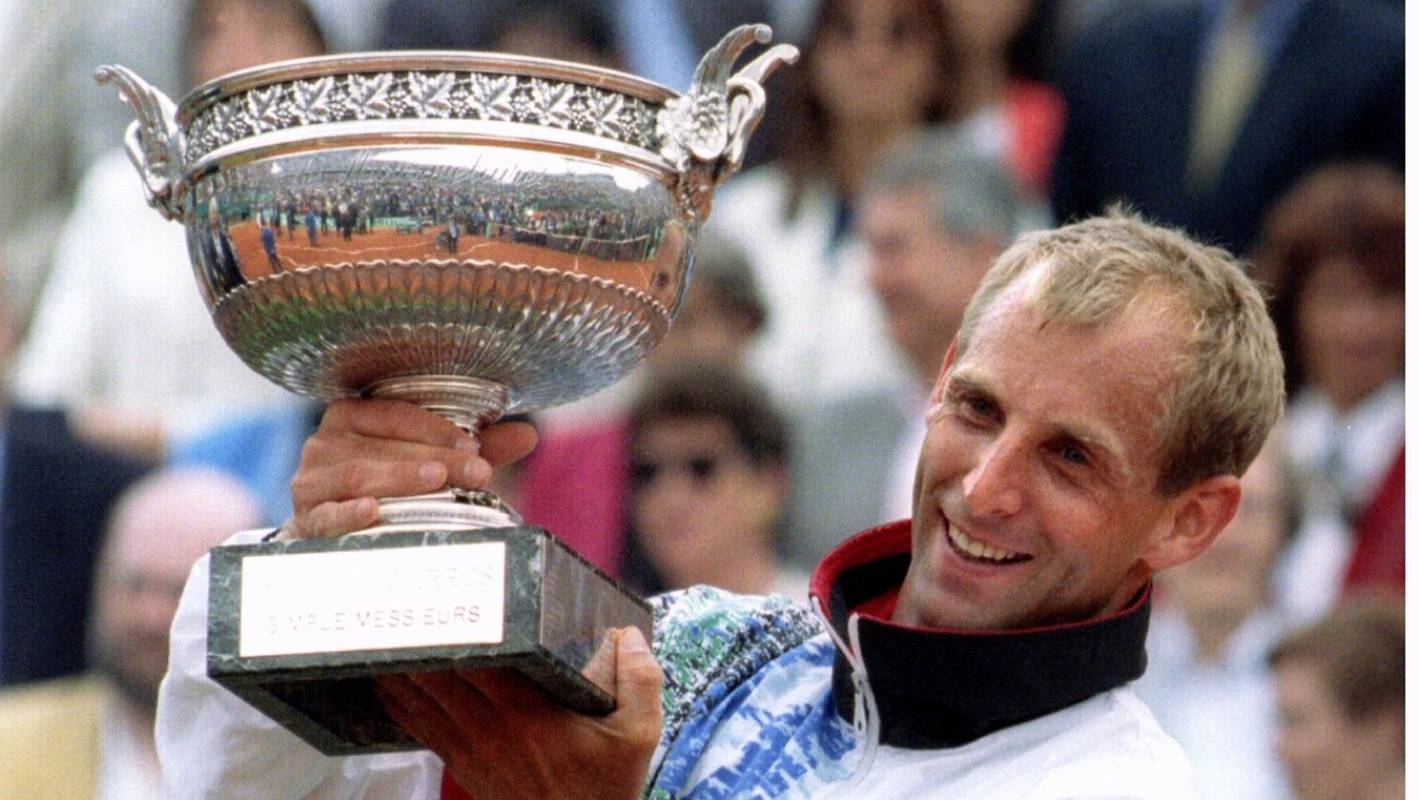 Thomas Muster had one of the more interesting tennis careers I am aware of, which was almost derailed at the start by a car accident at the start. His 1995 season is still in the record books, tied with Roger Federer for the most titles in a single year with 12 titles. He was the undisputed “King of Clay” before Rafael Nadal.  Muster would go on to win 40 straight matches on Clay that season and eventually became world #1 off his strength on clay court season and winning the French Open over former champ Michael Chang.

What I remember most about his rise to #1 was it being controversial, partially as what he had done being written off as manipulating the system and finding the weak spot to rack up on clay. After all here was a player that had a real disdain for Wimbledon and would barely play in it. One of the only times he would play in it coming in as world number 2 they seeded him 7th which didn’t help the relationship, nor did how badly he struggled on grass. He never got out of the first round in the 4 times he play which is hard to ignore.

At the time when you contrasted Muster to a player like Pete Sampras, it was almost the polar opposite. Sampras had more disdain for the French and his beautiful game never fit it in the same way Musters didn’t translate on Grass. If one was the beautiful game and how you wanted to play the other must be the inferior dirty one, no pun intended. I recall as a high school player feeling like this at the time because of course Sampras was the established star of the sport and specializing on clay was pretty new at the time. There would be a generation of clay court specialists after him that similarly would only have most of their success on the dirt. He gave the blueprint after that.

When Nadal took  Muster’s blueprint and put it on steroids I changed my opinion though. Why would clay be any less important? Why is dominating on the dirt any less impressive than winning on grass? Sure Wimbledon has the tradition, but more importantly, I think they had the NBC contract that pumped out the opinion I bought into, while the French was and still is barely shown. It also didn’t help that Sampras and Agassi, Americans and the faces of tennis, were complaining about him at the time too.

Certainly, grass and hardcourts speed correlated better than Clay to either, which I guess gave them more legitimacy in numbers with the other 3 majors producing a similar style of champions.  Still, clay a viable surface that should be equally respected is the opinion I have come to now. What is the difference in winning 8 French Open’s or 8 Wimbledon really? You beat the best players in the world on that surface and if your game fits it better why is that any different than Grass really?

Clay is actually a surface you can find to play on and practice, who reading this has ever played a match on grass? If any surface is the outlier white whale for the average recreational player it’s Grass. Maybe that and the tradition at Wimbledon is part of the allure and mystic. So Wimbledon is 12 years older than the French and they make them wear white big deal. Why wouldn’t Muster play this his strengths? That is exactly what you should do to maximize your rankings, winnings, etc. It’s on the competition to figure out a way to compete.

How He Did It

Muster won 44 titles, with 40 coming on Clay. Of the 4 non clay titles, probably the most impressive is winning a Masters on Carpet which is generally considered faster than hardcourt and just a little slower than Grass. He beat Sampras in the semi finals on his way to that championship which after Sampras complained about him being #1 had to feel pretty sweet. He would also win a Masters event in Miami in 1997. In the Australian Open he experenced his best success outside of the French making it to two semi finals, and a quarter. He would make it to 3 quarter finals at the US Open as well. Clearly a dangerous level player on hard court even if the clay over shadowed it. Grass however not so much.

The 4 times he actually played Wimbledon, losing 3 of them in straight sets to players ranked 100+. By 1995 Muster was #2 in the world and when Wimbledon seeded him 7th he would withdraw and never play in it again as a protest. It wasn’t the first time they had screwed him on seeding as he was ranked 11th the season before and unseeded. He only played 17 matches on grass his entire career.

Muster would drop to 125th in the world and eventually retire at 32 years old, but would make a comeback in 2010 at the age of 43.  The comeback went mostly as one would expect, but the one shining moment had to be beating Leonardo Mayer who was 23 years old and ranked 119th at time and would go on to have a nice career peaking at 21st. That was less than a month before Muster’s 44th birthday (on clay of course).  He would also face Dominic Theim in one of his first ever matches as well at 44. It’s a very interesting career.

That Time 59 Year Old McEnroe Gave a Ranked Player A Match
The Little Secret No One Ever Talks About With Majors
%d bloggers like this: