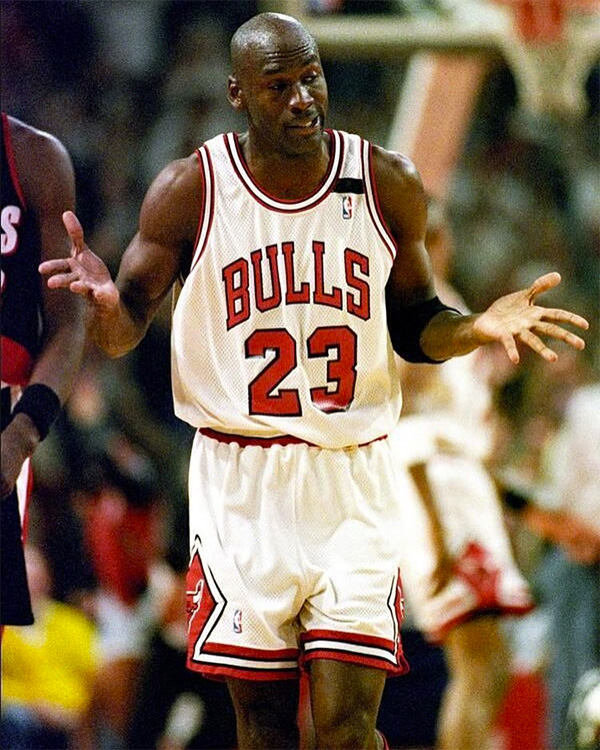 Previous article if you want the full case.

I’m reminded of Stats see all games every time I see a player have an outlier three-point game. That’s all people remember. The Michael Jordan’s shrug game vs Portland is probably the greatest example where he made 6 threes in the first half. I watched it live and felt the same way at the time. Jordan was great, and he showed up in the big moments, but the reality was he wasn’t a good three-point shooter. This iconic moment likely still leaves many who don’t follow it as closely with the impression he was. The reality was Jordan shot 27% that season and made 27 total in 82 games. He was also a 28.8% three-point shooter the rest of his career on the full-length 3 point line.

This brings me to Wembanyama. Yes, I think you have to draft him number 1, and we have him number 1 on our draft board. Where the disconnect comes in for me is when the rest of the world talks about him as one of the best prospects ever. He certainly showed up in a big moment and put on a show this week in an exhibition vs Gleague Ignite with 37 points. It was fueled mostly by 7-11 from three-point range. Let me say I believe he will be a great defensive player and that alone is enough to have him as the first pick. He also has many years to improve his offense, and this may even be the start of his 3-point improvement. If he comes out and shoots 34% this season from three the rest of the year, I will start becoming more of a believer myself. That said, the number of people falling over themselves after one fluke three-point shooting game is kind of amazing to me. Yes, it’s a fluke given his history until proven otherwise over the course of a season.

That is every three-point on record I can find that Wembanyama has taken playing in the French league, Euroleague, FIBA, and this exhibition included. All but a few come from a shorter international line.

There is no doubt when you watch highlights of Wembanyama he’s a pretty amazing prospect at his size, and relative level of coordination but that doesn’t make him an amazing player right now. The stats pretty much say the opposite outside of this game. For example, you can see a high level of skill in his ball handling, but what is he actually doing with it positively overall as a sub .500 true shooter last year. Even this season, through his previous 3 games he’s also sub .500. He takes threes off the dribble, which looks impressive, but they haven’t gone in overall. His assist rates are non-existent for the last few years. It’s all based on unrealized potential. He is young, and he will get better sure, but most prospects talked about like he is you saw way more tangible evidence of actual positive things on the court at the same age.

One game is all that will matter to many of these evaluators, he just had it and it cemented what they already believed. Even if Wembanyama shoots the 28% the rest of the season, that’s what they will remember now. Some GMs have even called for him to shut it down until the draft. I agree because his stock will never be higher, there is nothing positive he could do to raise it any more than it already is. It’s logical, but I’m sure they are thinking about it from an injury perspective. In my opinion, he only risks being exposed if this was the outlier shooting game and not the improvement we all hope for. If he continues to shoot like he did last season and is ineffective on offense with another sub .500 true shooting and 15 PER after the season again. That’s what I would worry about more than injury. He could tear his ACL and still be drafted first in my opinion.

Let’s take a look at some previous Wembanyama seasons . We’ll start with FT shooting since I believe it helps inform three-point potential. There aren’t many examples of good three-point shooters that shot 65% from the line outside of JR Smith.

That’s not the trend you want to see as he has grown and likely become less coordinated.

Wembanyama looks great taking three’s (even off the dribble) when they go in. The problem is they haven’t went in very often.

Since I believe more information is always better, he went 4-22 for 18.2% in FIBA U19 everyone talks about as well.

Probably the worst part was the significantly negative net rating he had last year. He wasn’t anchoring a good defense when he was on the court and the team offense was atrocious.

Wembanyama has played 3 games so far this season…

Maybe they are right and he’s one of the five greatest prospect ever, there is certainly that possibility but I’m not going to put him on that tier or give him credit for being a good shooter based on 1 game. If he can’t shoot it’s going to be hard for him on offense. The defense can still be Rudy Gobert-like, so he’s certainly a deserving #1 caliber pick. He’s just not Zion, AD, Lebron, Duncan or Shaq for me. Not anywhere close at this point as little as he’s doing on the court. He had a .493% True shooting and 15.7 PER throughout a full season. I don’t think any of those generational stars mentioned above would have put up that kind of numbers in the same league at 18.

Here are the once-in-a-generation can’t-miss draft prospects at the same age, or within 6 months for the most part. Lebron was 18 when he entered the NBA, but turned 19 by the end of December. Yes, the league Wembanyama was playing in was better than the NCAA, but they weren’t that much better. Especially not in the backup minutes he was mostly playing vs mostly backups and could go harder against. Had they had advanced stats, Pre 2005 there is no doubt some of these guys would have had amazing measurements in those as well. For example Wake Forest was 14th in the basic PPG Defense with Duncan as a freshman. No doubt he would have had a dominant Defensive Rating playing 75% of those minutes. Ewing anchored an 8th ranked one as well as a freshman.

The truth is Wembanyama’s stats look more like Theo Maledon than AD or Zion’s. At the same age in the same league, Maledon had a 12.5 PER, .551 TS, -7.1 net rating and there are plenty of examples of 18 years olds doing as well or better in the same league.

Was this Wembanyama’s Shrug Game or was it the start of the improvement from three overall on offense we all want to see? I hope so but I got to see it over an entire season and a lot better efficiency and production before I crown him as one of the best prospects ever. Others are quick to put him in that class of player, some at the head of it. The three point shooting specifically will be a large indication of his future if there is growth. It seems hopeful so far, but there is a lot of personal history to overcome as well. I’m certainly willing to be won over if he produces on the court but I want to see more evidence of it. This game was a good start.

The Best Non NBA Team In the World: Where They Would Rank
Boban Marjanovic: The Small Sample Size Hall of Famer
%d bloggers like this: