What If Sampras Played Longer? 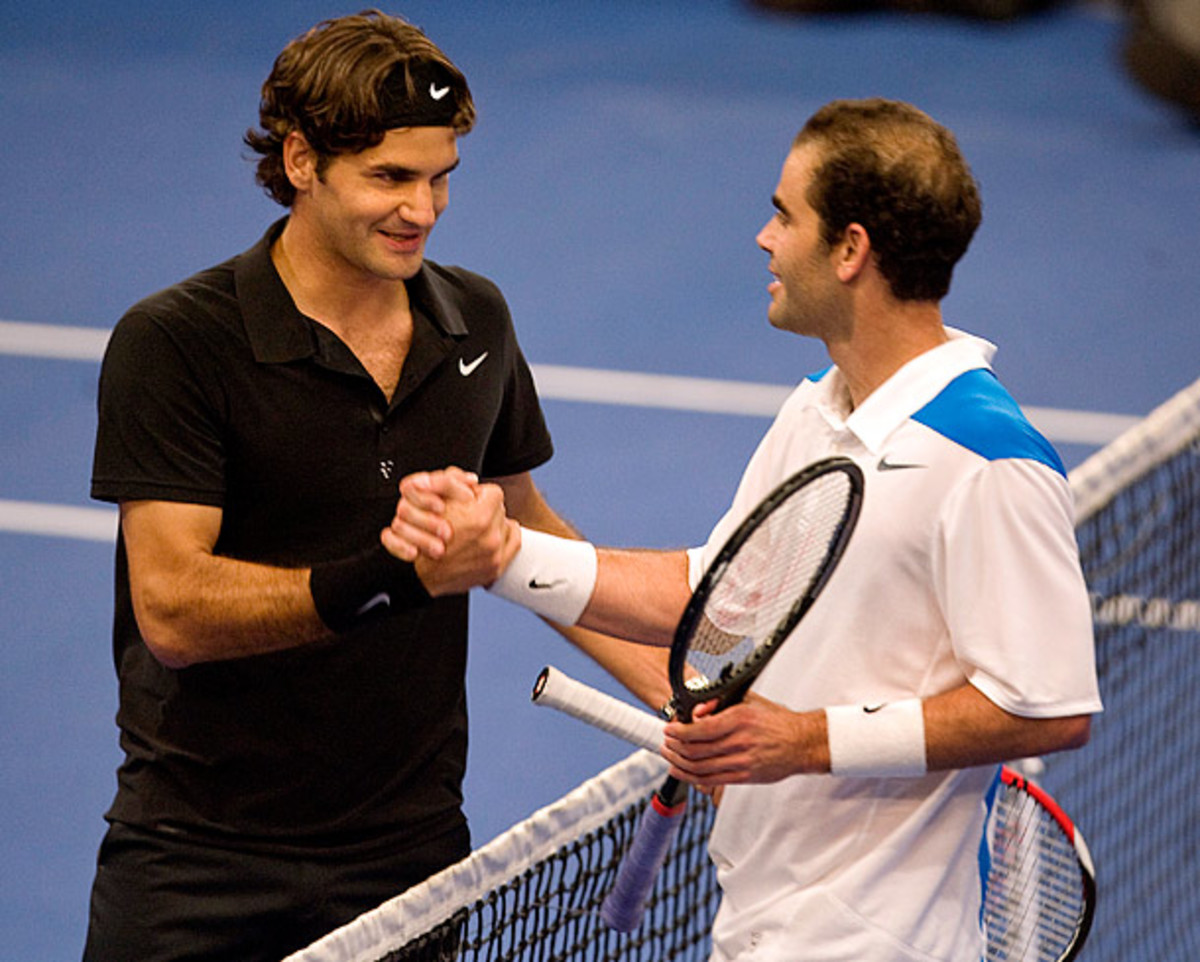 Let’s talk about what the career of Pete Sampras might have looked like if he didn’t retire after winning the US Open a month after his 31st birthday, he had gas in the tank, certainly. We know Pete Sampras’s Net worth of $150 million would have been greater, but how much greater could it have been.

Pete mic-dropped us all winning the US Open in 2002 and riding off into the sunset. Many fans love when athletes walk away on top, but personally, I’m not one of them. I feel kind of robbed of a natural ending and lingering questions about what could have been. Sampras had just turned 31 a month earlier before winning, and what if Roger Federer had retired at exactly the same point in his career after winning Wimbledon in 2012 a month before his 31st birthday?

We can quantify now how much amazing tennis would we have been robbed of with Federer in a similar situation whereas this is just speculation with Sampras. For Federer, 3 more Majors, 7 more finals, the oldest #1 ranking ever, and many more great matches with Nadal and Djokovic. All those amazing feats added to his legacy. Let’s take a look at where Sampras’s game was when he decided to walk away.

Sampras had been the world number 1 from 1993 to 1998, an incredible record for six straight years finishing number 1. When you have been at that level and set the standard for so long any slippage had to feel like a big deal.

In reality, the slippage to #3 in 1999 and 2000 wasn’t that massive. In 1999 certainly, he could have been and likely still was the #1 player having missed 2 majors and time with a knee injury and herniated disk. Serious injuries but ones he overcame and in the grand scheme of what other tennis players like Nadal, Federer, Agassi, and Andy Murray have played through relatively minor.

What probably didn’t help was an older rival Andre Agassi was the one that finally dethroned him for the 1999 year in rank, although Sampras had beaten him handily 4 of the 5 times they played in 1999. Couple that with the emergence of 20 year olds in Lleyton Hewitt and Marat Safin that would become the 2 youngest #1 players ever in 2000 he had competition.

Hewitt would beat Sampras in 2000 and win 5 of the last 6 matches with him. Safin would beat him in the 2000 US Open at 20 years old which had to feel like a changing of the guard as well. In reality, neither was even the biggest threat on the horizon with Roger Federer having yet to emerge as a dominant force. Federer had beat Sampras at Wimbledon in 2001 and it’s likely Sampras knew he was going to be a problem there at least. Also, Andy Roddick was bombing 150 mph serves and had won their first two meetings.

In a way, you can understand the thinking of getting out before the new generation started to get it into gear. Sampras’s rankings had fallen to 17th in the world and an unremarkable 20-17 by 2002 before the US Open started. In many ways, it was justifiable for him to walk if he believed he was done winning and this was more a fluke than a return to form. It appeared to be a stacked field of up-and-comers where winning would have come scarce. It was also a nice finish to beat your rival to win the US Open in Agassi and walk away on “top”. That all likely played into his decision.

What many forget is he had changed much of his management, his coach, his diet, and training. The US Open is really where it came together. I don’t think he was done at that point clearly could he have stayed motivated? He was healthy and relative to many other players the injury history was manageable. It seemed more like he was just over the grind of it as a newly married father. I think you would have liked to have seen even more motivation for the new challenge and try to fight off the young guys, for a few more years like Agassi. Sampras still had the skills to at least compete as well as Agassi and likely better having just beaten him in the 2002 US Open Finals. Agassi would win 2003 Australian Open and go to the US Open Final in 2005. He’d also make 2 SFs and 3 QFs from 2003 to 2005 and finish 4th, 8th, and 7th those seasons.

Sampras would play 2 exhibitions in 2007 on the Champions Tour winning both. Many observers noted that despite Sampras’ lengthy layoff of 5 years from competitive tournaments, he still possessed game, with commentator John McEnroe going as far as to say that Sampras would be worthy of a top-five seeding at Wimbledon were he to enter the tournament.

On November 20, 2007, at the age of 36 Sampras lost the first of three exhibition matches in Asia against then world #1, Roger Federer, in Seoul, Korea. Two days later in Kuala Lumpur, Sampras again lost to Federer in two tiebreaks 7-6, 7-6. Sampras was able to win the last match of the series, winning in two sets on a fast carpet having never faced a break point 7-6, 6-4.

Say what you will about how seriously Federer took these, but he was 26 years old and the world #1 at the time. At the very least it’s concrete evidence that Sampras could still have played at a high level until 36 years old at the very least and been a dangerous draw for anyone. That serve and volleying would have allowed him to be a threat for many years.

“I’m sort of surprised. This guy can play tennis, you know,“ Federer said after his loss. Federer said he thought Sampras could beat the top five players on a fast surface.

Lending more legitimacy to the statement on February 18, 2008, in an exhibition match Sampras defeated another active player, who was ranked #11th in the world less than a month earlier Tommy Haas. He beat him in 43 minutes.

I think given the evidence, and how well Federer, Agassi, Nada,l and Djokovic would all play past 35 years old seeing Sampras at 31-36 late into the 2nd week of a major wouldn’t have been shocking at all in retrospect who made many of these. This match could have been exactly what it would have looked like in 2008 in a major. There wasn’t as much evidence of this possibility when Sampras walked. After modern graphite rackets came along, you had essentially Jimmy Connors playing at a high level and not much else.

Thankfully Federer gave Sampras matches and a measuring stick. At the time some thought Federer was only playing against his legacy by giving Pete a chance to make a mark. There was talk as well of Federer’s era being weak, and the coming era behind him (Nadal, Djokovic, Murray, Wawrinka….)not being as strong either. That was all false though and born from how strong Federer and Nadal were as we can see now. Those two eclipsed Hewitt, Roddick, Safin, etc who have Sampras and Agassi fits, as well as Federer early.

The exhibition in 2008 posted above was after Federer had already lost one exhibition, and barely won another, there was no doubt he was taking it seriously by that point. The old man could still play and what was very valuable in these exhibitions was they gave the fans a glimpse of what it might have looked like if Sampras was still out there playing until 2008. It was tangible evidence that he could still compete with top 10 players like Federer and Haas. It would have been good for tennis to see a few of these matches vs Federer, Nadal, and Djokovic for real as well to bridge that gap a little more and give them more of a handoff. Not just that, I believe Sampras could have won majors, at least 1 more if not 2.

It is true Sampras wasn’t playing as well in 2002 before the US Open, but the change of coach and diet finally started to pay off. Wimbledon and the US Open would slow their courts down some as well in 2002, but the way he still stormed the US Open and won it’s pretty clear he had regained form and was capable of competing. Knowing how competitive he still could be at the age of 36 in 2008 I believe he could have bounced back to be a top 5 to 10 player in 2003 if he had had the drive and likely beyond.

Agassi would win the 2003 Australian Open, and having just beaten him at the US Open I believe that major would have easily been in play for a Sampras win. It likely would have been his best chance at another major given his age, more recent form, and head-to-head with Agassi. He had also beaten Roddick another semifinalist at the US Open. It was in a nice window before Federer ramped up, I’m going to give it to Sampras.

The French were always a waste of time, maybe he just starts skipping it and the clay season like Federer would later do to focus on Grass and keep fresh. I do believe 2003 would have been a chance at a potential epic with 4 seed Federer winning his first major at Wimbledon that year. I doubt that changes, and Federer likely still win, but he could have met him along the way in a classic. The two had played a 5 setter 2 years prior. I think Sampras makes it to the SF if not the Finals of Wimbledon 2003 after the disappointment of 2002.

US Open 2003. Agassi was the #1 seed and would make it to the semi-finals. Federer would lose in the 4th round. This was another major there for the taking vs a young Roddick. Pete had beaten him at the US Open the year prior and I think would have gotten him again. 2003 would have been a good year for Sampras I believe. A return to #1 wouldn’t have even been out of the question as Agassi would make it there in season, and Roddick would finish 2003 #1.

Strap in, these were the year Federer emerged winning 3 of the 4 titles all but one year. Safin got the other who had already beaten Sampras in a major title. I do not think Sampras alters any history here at the top. Federer still wins the titles in those 3, and Sampras was a nonfactor in the only other major (French). Still, Sampras probably competes very well, and when you see some of the caliber players in the QFs and SFs I do believe he’s a player late in many majors in this period.

Only Henman was in the top 10 and that was the US Open, and he was older as well at that point. None of these players would scare Sampras if he were in form. 2005 when Agassi and Schuttler made it to the SF’s and Agassi to the Finals set up perfect for Sampras to get to the Finals.

He would have probably been upset a few more times than our prediction, but I think he does get to the QFs or SF’s many of these seasons with who was making it.

This is just my estimation of the likely outcome or potential. Agassi was still top 8 and went to a final of the US Open in 2005. I think that could have been Sampras, and he probably has at least 1 more major. He was also younger and more healthy overall than Agassi who got another one in 2003. At 36 in 2008 when we last saw him play Haas and Federer, he likely would have slid some but still been a threat for a deep run based on the play we saw there.