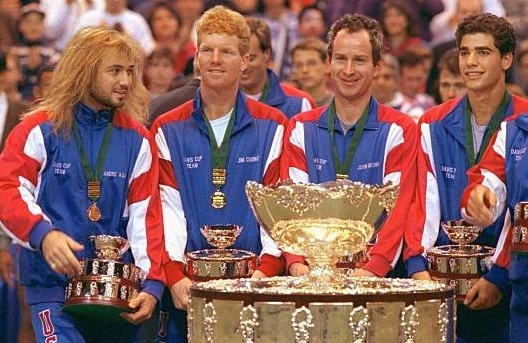 Let me start by saying that USA Tennis appears to be in the best spot it has been in almost two decades, and the future is hopeful. Nine of the top 50 players in the world are American, and only one is over the age of 25.

Ten years ago there was a survey by the tennis industry that showed tennis grew 13% in participation with players age 6-11, so finally, the fruits of that may start showing up these next few years particularly with the 21 and under crowd. Although looking down the list there aren’t a lot of obvious Agassi, Chang, McEnroe, or Sampras’s on the way up. They were doing things in their teens like Carlos Alcaraz currently is.

That looks hopeful, but none of the young players has yet cracked the top 10 much less won a major or contended as a favorite for one. Most are still 30+ in the rankings as well in the back end of the top 50. Frances Tiafoe’s run to the semi-finals was a nice start, but it was a Cinderella run and not one as a top contender with any expectations. It did help him crack the top 20 for the first time.

All that said, and our neighbors to the north in Canada probably have the two best young players on the continent if I were picking futures. Both are younger and both have cracked the top 10 already.

I understand any country can produce a special player or two that could rise to the top of the ranks no matter how small they are in the population. Casper Ruud from Norway (5.3 million) is a great example. It just amazes me that a country as large and wealthy as the United States has produced so few top 10 players the past two decades. Especially with the wealth and warm weather pockets of the country elite prospects can relocate to. This is while you have examples of places like Canada and Russia producing the players they have.

Even Karatsev was ranked 14th earlier this year, and Khachanov has been ranked as high as 8th. The Russians are all a different level of proven players, most at a similar age to the top Americans. I guess it’s a little more understandable from a country as large as Russia with 144 million people, but that’s still 144 million compared to 332 million. It’s also cold most of the year, especially in the places these Russian players came from. While I’m sure there are some indoor facilities in Russia, I doubt it is anywhere near the level in Europe and the west.

There are multiple other examples of talent produced by other countries and their current ranking and age.

Over the next 2 to 3 years, I believe I would take the top 2 from almost every country except Argentina I have listed over any of the USA players. Most have been ranked higher already, and I like their prospects better. I believe this puts it into perspective where USA tennis stands in the world and the context of what other countries are producing.

When you really think about the level of players these countries are producing relative to their population, it’s incredibly impressive. It’s not just one outlier player like Ruud, it’s multiple top 30 players in most cases from much smaller countries than the United States. There are four in the top 33 from 2 countries that combined for about 11 million people, the same as the US with 33 times the population. I’d also take their top two of Djokovic or Cilic head to head the next 2 years to have better seasons even if they are mid 30’s. Over most of 2010s Switzerland had Federer and Wawrinka for example, not bad for a country of 8.9 million people and mostly mountains.

How did we get here

When I was introduced to Tennis in 1989, USA tennis was ready to take off like a rocket ship. It already had rich history with players like Jimmy Connors, John McEnroe, Stan Smith, Poncho Gonzalez, and Arthur Ashe in the Open Era. The generation I grew up watching in my formative years of Pete Sampras, Andre Agassi, Jim Courier, Michael Chang all won majors and reached world #1 or #2 by the mid 90’s. Even their peer players like Todd Martin (4th), Aaron Krickstein (6th) Jay Berger (7th) Malivia Washington (11th) David Wheaton (12th) Derrik Rostango (13th) would have their moments and rank in the top 15.

At one point, there were six Americans in the top 11 in 1992. It’s the golden generation of American Tennis. To go directly from that after Agassi retired to what the USA has been the last 15+ years would have been incomprehensible to me in the 1990’s. It still is today logically when you look at the population of this country and where the sport was at the time in the pantheon of athletics. To go from that level of player all born in a 7 year period, to basically a list of notable American players that includes Andy Roddick (1st) James Blake(4th), Marty Fish (7th) Jack Sock (8th), John Isner (8th) Sam Querry (11th)and now Taylor Fritz (11th) the last 20 years is baffling.

While it’s certainly true the Big 3 took the air out of Roddick career and probably even Blake to some small degree, it doesn’t explain why the rest couldn’t crack the top 7 or there are so few top 10 contenders even. Top tennis athletes are some of the most marketable athletes in the world. Roger Federer was often the 2nd richest athlete in the world over this period and Nadal and Djokovic weren’t far behind. There is vast earning potential if you can make it to the top, and the sport is thriving around the world. This is really only an American issue.

This also comes during a time period when most Americans started focusing on 1 sport. Growing up I played organized Tennis, Basketball, Football, Baseball, and Soccer which is not happening as much these days. Tennis was the only sport I was good enough to play at the college level, and we had a mostly American team at my D2 school. One of my teammates coaches now and there aren’t even Americans on the team and hasn’t been for years. There are thousands of college scholarship dollars at stake as well, even if you didn’t set your sites on a professional career. Those scholarships go mostly to foreign players now which begs to question of why more parents don’t encourage tennis.

The kind of kids that would likely to play tennis now are likely not allowed to play football. That’s a shift as well in the last decade since the concussion information really took hold. Not even at the Jr high level I did. If anything, it seems like the environment for tennis in the United States should be stronger than ever with the decline of the popularity of sports like baseball as well. Yet it hasn’t equaled more talent going into tennis, even as tennis has to be one of the safer and more exciting sports for youth than say baseball or football.

What the US really needs the most is another Andre Agassi. His flashy persona is what originally drew my interest in tennis. It was just cool, and that was before he was even winning anything. I think it would take that level of marketable player at this point to really get the interest back. That or a player that dominated about everything like Sampras did for a while to drive the interest again. You kind of have to wonder if there is even a top 10 main stay on the way. I’m sure a couple off that list will have a cup of tea in the top 10, but I’m not sure I even see a Roddick or Chang. We will see, and hopefully someone emerges. It’s been a long wait.